Mutsu-Ogawara Industrial Park is an international science, technology, and energy base, which makes use of the forests, lakes, and swamps. It is one of the few large-scale industrial spaces remaining in Japan in the 21st century.
Many facilities with world-class technical standards are located here, including nuclear fuel cycle facilities, nuclear fusion related facilities, the Quantum Science Center, the Institute for Environmental Sciences, an ornamental flower factory supported by biotechnology, and organic EL related factories are located within Mutsu-Ogawara Industrial Park. Additionally, excellent researchers and technical experts working in an environment where the latest science technology and information are accumulated have come to Mutsu-Ogawara Industrial Park from around the world and from the local area. Moreover, many researchers and technical experts are also employed from the local area. “Shin-Mutsu-Ogawara Development Basic Plan” formulated by Aomori Prefecture was approved at a cabinet meeting.
Japan has designated Mutsu-Ogawara Industrial Park as “an important area in energy and nuclear policy in Japan”. Therefore, for the new Basic Plan, it was decided that there would be coordination and cooperation between the country, the prefecture, and the related organizations, as a national project.
The initial basic project was a construction plan of a large-scale industrial base that aimed at the formation of a petrochemical complex, but the new Basic Plan aims for the formation of a “science and technology creation area” which aims at being a location for R&D and growth industries with regards to the environment, energy, science, and technology. This plan will be used as a basic guide until the 2020s. 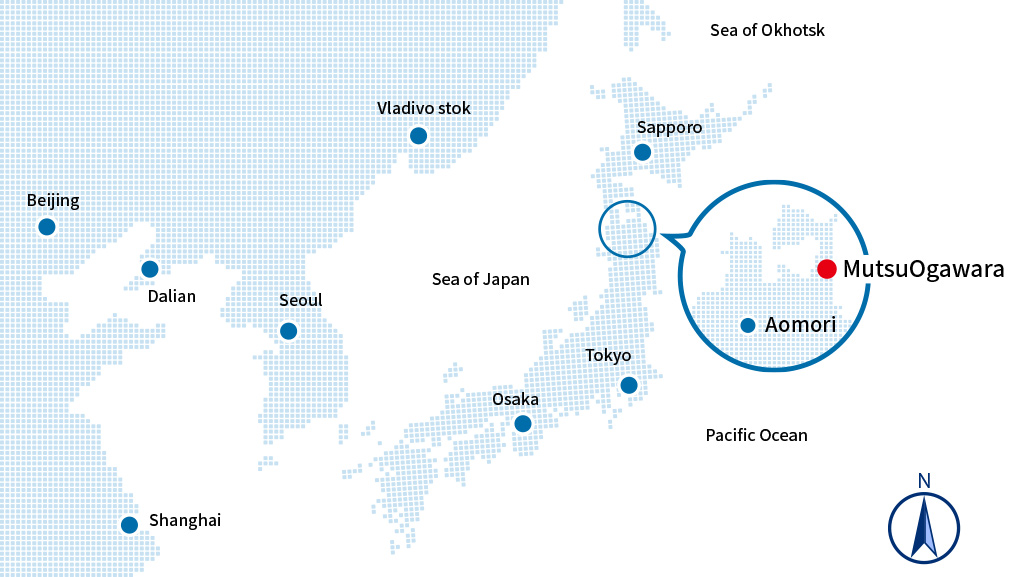 Many facilities with world-class technical standards are located in Mutsu-Ogawara Industrial Park.MOIP forms an environment where the latest science technology and information are concentrated, including: nuclear fuel cycle facilities, nuclear fusion related facilities, the Quantum Science Center, the Institute for Environmental Sciences, an ornamental flower factory supported by biotechnology, and organic EL related factories. Technologies and information developed there are provided in various directions. 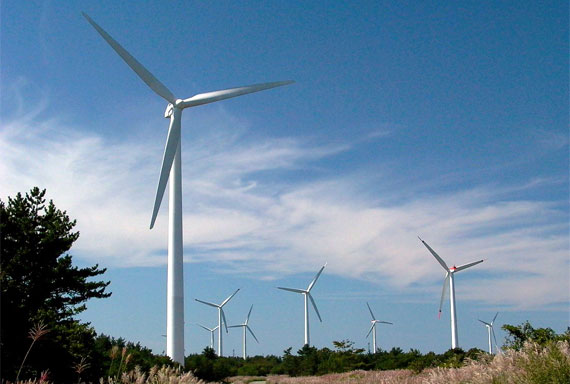 This is a power plant from Eco Power Co, Ltd that utilizes wind, which is unlimited clean energy. It is a wind farm with 21 1,500-kw type large power generators installed, and it has been in operation since January 2003. The energy storage facilities of FUTAMATA Wind Development Co., Ltd. are the world’s first large-scale commercial wind power facilities which include storage batteries. It is a system that generates electricity and stores the energy in a storage battery (NAS). The battery equalizes and transmits electric power in order to compensate for the disadvantages of wind power generation, which is the fluctuation of output due to wind strength. It is the third solar farm location created in Mutsu-Ogawara Industrial Park. It is operated by Mirai Soden Kamikita Rokkasho K.K. (Sojitz Corporation). The plant capacity is 51 MW, and operation started in February 2017. You can see the integrated energy facilities from the adjacent observation deck. 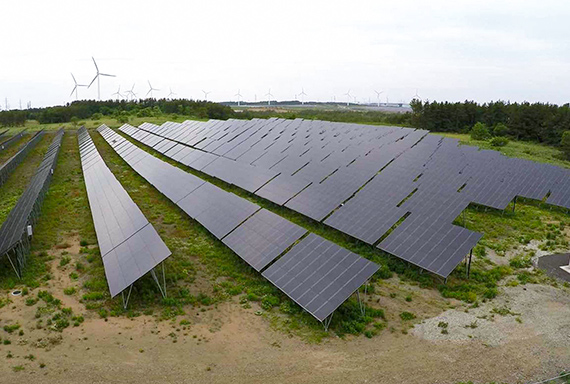 “Eneone Solar Park Rokkasho Village” is the first mega solar park in Mutsu-Ogawara Industrial Park. This solar park is owned by the Rokkasho Joint Enterprise (Saisan Co., Ltd). 14,336 solar panels are located on this site which spans about 5 ha. The plant capacity is 2 MW, and operation started in September 2013. 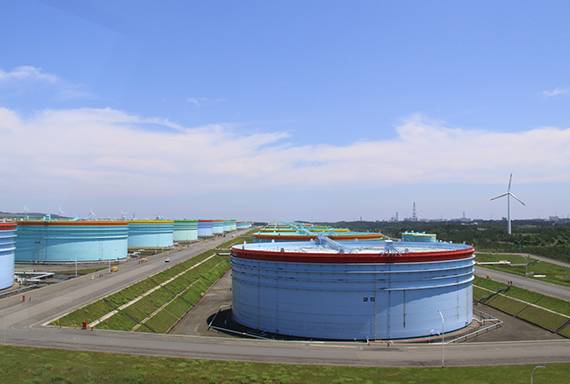 It is the first national petroleum stockpiling base in Japan, and was completed in December 1985. 51 colorful tanks with a height of 24 m and an inner diameter of 81.5 m line the storage facility. Approximately 5 million kl of crude oil (about two weeks of domestic consumption) is stockpiled, and Mutsu-Ogawara Oil Storage Co., LTD. carries out operations, facility management, and safety disaster prevention, and receives consignments from petroleum, natural gas, and metallic mineral resources organizations. 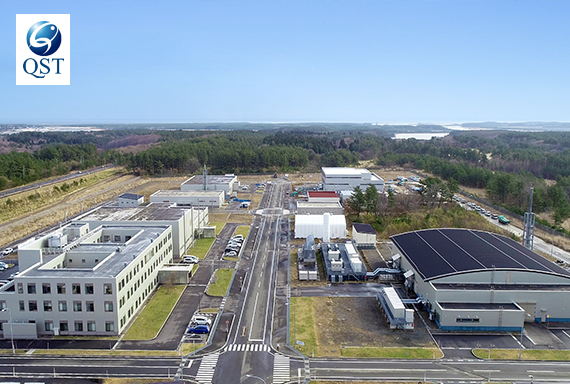 International Fusion Energy Research Center was completed in March 2011 and began research as a base of "broader approach (BA) activities" for conducting nuclear fusion energy research from various angles,in order to support and complement the ITER program and to develop the next stage of the ITER, which is“a prototype reactor”. The off-site center was created in February of 2002 as a nuclear disaster countermeasure. The facility is used for the country, prefecture, local public entities, and other involved parties to take the appropriate preparations in the event of a disaster. In addition to meetings of representatives of relevant organizations, meetings, disaster prevention activities, the liaison and coordination of agencies, and research and training aimed at improving disaster prevention measures are conducted here. 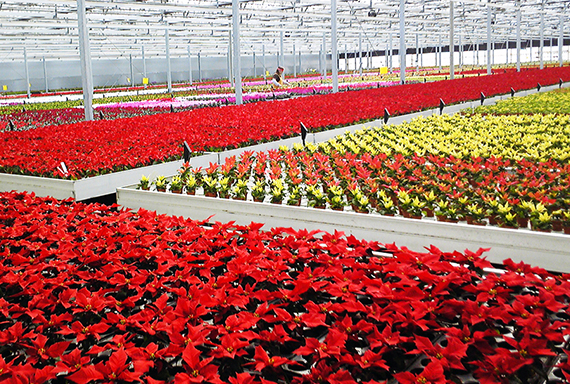 This ornamental flower factory which started operating in October 2000 is the largest factory of its kind in Asia. The greenhouse has a width of 88 m and length of 231 m. The greenhouse operations include temperature humidity management and sunshine control. Using a fully automatic cultivation system, the greenhouse produces 4 million pots of mini-roses and other flowers per year. The Institute for Environmental Sciences was established in 1990, and it has been researching “the relationship between nuclear power and the environment” as a major theme. Moreover, individuals at the institute also produce helpful research for the promotion of local industry. The Advanced Molecular Bio-Science Research Center (AMBIC) was established in September 2004, and it has been investigating the effects of gene/cellular level low-dose radiation on animals. The Aomori Prefecture Quantum Science Center opened in October 2017 as a base facility that promotes human resources development and R&D in the field of quantum science. It implements activities through industry-academia-government collaboration and aims to develop the region and revitalize the economy.